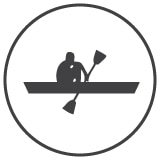 Chobe Elephant Camp maintains the strong ethos that the owners wish to portray, that of being an eco-friendly camp at an affordable rate…. we believe that they have achieved this admirably. These days it is very difficult for any lodge in the Chobe River Front area to keep the enigmatic name and history of “Chobe” alive. This region is not quite what its used to be and the Kasane end is now swamped with lodges and their vehicles gaining entry into the park.

Chobe Elephant Camp is away from all the hustle & bustle and some 50 kilometers south at the other end of the park on the edge of the Chobe Forest Reserve. The benefits are that you are in a much quieter and private area and gain access to the National Park in a far less busy area… so you get get all the advantages at a very reasonable price. Its a very good 3 star Lodge.

Northern Botswana is home to the largest population of elephants in Africa, and the life giving waters and rich grazing on the flood plains of the Chobe River attract some of the largest concentrations of these magnificent giants of the bush.

Besides the elephants, the Chobe River and surrounding woodlands supports an incredible diversity of animals and has developed a reputation of being one of the great wildlife destinations in Africa. From large herds of elephants swimming in the Chobe river, zebra and buffalo grazing on the floodplains, giraffes feeding on the acacias trees and shy roan and sable antelope ghosting through the teak forests, there is always something of interest. Combine the above with some of the highest predator densities in Botswana (Lion, Leopard, Wild Dog and Hyaena) and it is clear why this is such a wildlife mecca.

In addition to the mammals, the Chobe River is also home to over three hundred bird species and is one of the top birding destinations in Botswana.

Your days are spent traversing Chobe on game drives

Boating on the mighty Chobe River

Canoe down the Chobe River for its wildlife

Children of 2 years and older are accepted

Located high on the edge of a rocky ridge overlooking the famous Chobe River is the newly developed Chobe Elephant Camp. This uniquely designed lodge has been built to take advantage of the incredible views overlooking the sweeping floodplains while offering a comfortable refuge from the harsh African conditions.

Built from the same red Kalahari sands that dominate the northern part of Botswana, this eco-friendly lodge is ideally positioned to take advantage of everything this incredible destination has to offer. Be it the spectacular wildlife that the Chobe River is famous for, or the opportunity to interact with the local Sibuya Tribe who live within this wildlife haven, Chobe Elephant Camp offers its guest a true African adventure.

The lodge has been entirely constructed from sandbags, the thick sand-filled walls create a natural insulating barrier between the inhabitants and the harsh African climate and enhance the old farm-style feel of the camp.

Chobe Elephant Camp has been designed to capture the feel of the traditional Farmstead located in the African wilderness. Polished floors, exposed wooden beams and weathered furniture capture the feel of rustic charm. Mix this with some contemporary style and the lodge has a unique feel of old meets new and offers the guests something different and unique.

Keeping the environment in mind, the development has focused on renewable resources wherever possible. From ensuring that all the construction timber and furniture is manufactured from renewable wood sources or from reclaimed wood, to using the sun’s energy to heat the water, Chobe Elephant Camp makes every effort to keep its carbon footprint as small as possible, while at the same time never compromising guest comfort.

All rooms are en-suite with both indoor and outdoor showers. The whole lodge has been designed to take advantage of the spectacular views over the Chobe River, so whether you choose to relax on your private veranda, read a book in the lounge, have a drink at the bar or cool off in the pool, the vista will always be there to enjoy.

All rooms are built like small cottages and set right into the thickets and are reachable via sandy paths. Ruggedly constructed in a farmstead style they have concrete flooring and solid walls adorned with wood.

All furnishings are also made of wood with a large double or twin beds against the back wall. To the side is a separate toilet and bathroom area.

The entrance to each cottage also serves as a concrete veranda

The Lodge is located high on the edge of a rocky ridge overlooking the famous Chobe River and affords itself fantastic views over the floodplains and river area.

The Chobe National Park was named after the Chobe river, which forms the northern boundary of the park. The Chobe River area is very rich in plant life, offering Bachestegia sandveld, mopane woodland, mixed Combretum veld, floodplain grassland and the riverine woodland. The latter has, unfortunately, been severely damaged by elephants and has in places been reduced to scrub or totally denuded.

This camp is built into an area comprising of mostly thickets which is typical of the area. because of its private location, animals do wander though and the camp is located quite close to the entrance to the Chobe National Park River Front ar

Where is Chobe Elephant Camp...?