The Greater Linyanti Region encompasses the Linyanti, Selinda, Kwando and Chobe Enclave. Bordered by the Kwando and Linyanti Rivers the region now benefits from the flooded Selinda Spillway, which was dry for many years but is now a major attraction for wildlife and game viewing alike.

We consider the Greater Linyanti to be the larger region to the north of the Okavango Delta where it is much drier and less effected by the Delta floods.

This area is exceptionally wild and seemingly untouched by human habitation, thus game viewing here can be magnificent. There are no fences in the whole region and therefore the game is not restricted in its movement. This is where you will see the vast herds of buffalo and elephant backed up by a very healthy population of predators. Greater Linyanti is one of the best areas in Africa to witness wild dogs and den sites have been recorded now for many years.

Activities in the region are wide ranging and include the mainstay of incredible game drives which also allow for night drives and the ability to drive of road when following predators. More specialised activities include walking safaris, an amazing 45km Canoe Trail down the Selinda Spillway and spectacular horse riding at Motswiri.

In our opinion, we at Safari Lifestyles believe that these regions are some of the best in Botswana to visit. 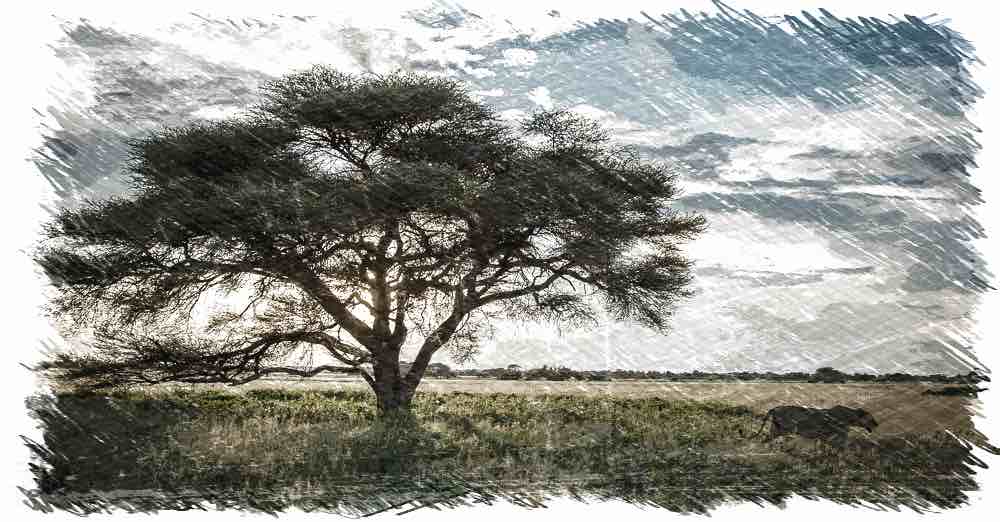 This reserve is simply a safari paradise. The reserve itself is vast and is made up Mopane forest and thicket to the west where literally thousands of elephant spend their day before trailing up to the northeast through areas of open plains and palm tree islands leading to the waters of the Kwando River. Huge herds of buffalo wander through and the predator interaction is second to none.

Wild Dogs have been denning habitually in the area thus giving the traveller pretty much unrivalled excitement and viewing opportunity. Do not be at all surprised if you find your self thundering through the bush in pursuit with these hunters who seemingly ignore your presence… if you really want to understand one of the great aspects of being on safari and how you can get so close to nature, then this experience is a must!

In this respect, perhaps what makes the area so special are the concession managers and their two Lodges, Lebala and Lagoon which have free reign in the region. Their guide and tracker policy coupled with limited seats on a vehicle is pretty much unique in Botswana, and their sheer enthusiasm for a wild game experience surely puts them close to the top when it comes to your adventure.

In this area it isn’t really about how many stars the lodges have (although you certainly won’t be disappointed), it’s more about being there…!

Travelling down south from the Kwando River you will reach the Selinda reserve. The area itself is similar to the drier open regions of the Kwando reserve and shares its magnificent wildlife. This area however has the benefit of the Selinda spillway. The spillway was for many years dry but since 2009 the water has connected the two areas of the Linyanti River and the Okavango delta, the consequences for wildlife have been dramatic and numbers have increased accordingly.

The flowing spillway gives the region a different complexion to is near neighbours and provides the lodge owners with some unique activities. Motswiri camp offers walking safaris and specifically horse riding safaris with their permanent stables. Selinda Canoe Trails host a 45km canoe expedition up the Selinda Spillway itself camping en-route in fly-camps.

As it shares its area within the Greater Linyanti, the game viewing is equally as spectacular as its neighbours, testament to the fact is that the Selinda Camp and the opulent and exclusive Zarafa Camp, with their proximity to the spillway and the Zibalianja Lagoon, are under the banner of the Great Plains Conservation group, owned in part by the renowned filmmakers, Derek and Beverly Joubert.

Moving east of the Selinda area, The Linyanti reserve is the preserve of the mighty Wilderness Safaris, a company that specialises in high-class accommodation. The Linyanti River borders the reserve to the north and to the east by the Savute area of the Chobe National Park, again, it shares similar habitat to its other large Kwando and Selinda neighbours but its closer proximity to Savute does make a difference.

Like the Selinda spillway, the Savute channel was dry for many years and only served as a reminder of a water course that connected the Zibalianja Lagoon to the Savute Marsh, certainly living up to its reputation as the famed “stolen river”, but happily since 2008 however it has been flowing freely. Here again, the effect on wildlife has been to bring in species that were rarely seen such as hippo and water birds.

To the very north you have the small and relatively remote Chobe Enclave community concession. The area is edged between the now flooded Linyanti marsh and Chobe National Park. The Linyanti marsh and swamps here are pretty much the only source of water in the area outside of the rainy season and since 2009 has provided near permanent water allowing for great wildlife viewing.

Visiting 6 quality lodges, the tour initially takes you through Chobe National Park, staying on or besides the Chobe river area with game drives and sunset boat cruises.

The emphasis here is on the viewing of wildlife. All 3 camps are in private concessions allowing you the maximum range of activities whilst you are out on excursions

This is a 5 night tour which takes you to both the Selinda and Duba reserves. The Greater Linynati region of Botswana is synonymous with big game

Because of the abundance of big game in the region, the main activities concentrate around game drives. As the region is made up of private concessions there is the ability of driving off road to follow predators and conduct night drives to spot nocturnal species.

Some of the camps are based on the waterways of the Linyanti and Kwando rivers and depending on water levels may offer boating and mokoro activities.

Of particular interest in the region are the horse safaris offered out of Motswiri and the marvellous Canoe Trails based out of Selinda Camp. Please look at our Special Interests section above.

The Greater Linyanti region is predominantly made up of private concessions, therefore all the accommodation is exclusive. Mostly you will find luxurious fixed lodges with limited number of beds, benefiting from their area being placed near regions of natural beauty.

Where you stay really depends on your style, Both Kings Pool and Zarafa offer stunning lodges and service to match that rival anywhere in Southern Africa, but the lodges of Lebala and Lagoon although not quite as opulent, concentrate more on the game experience. The camps in the Chobe Enclave are more rusting permanent tented structures which is reflected in their price. 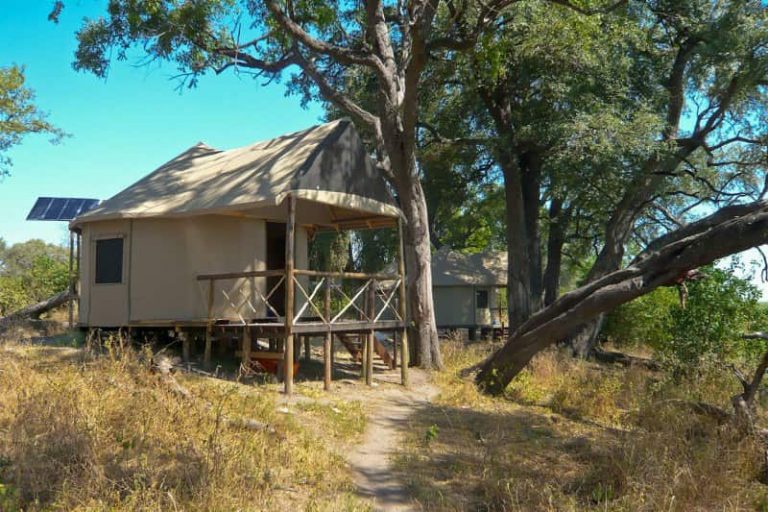 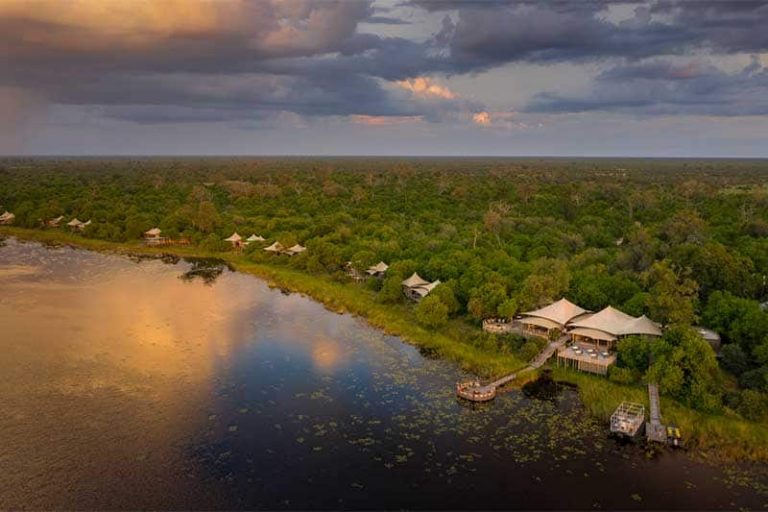 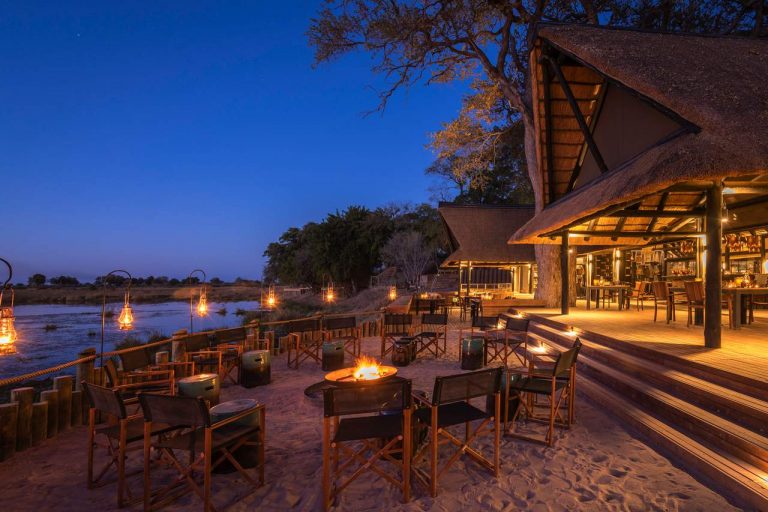 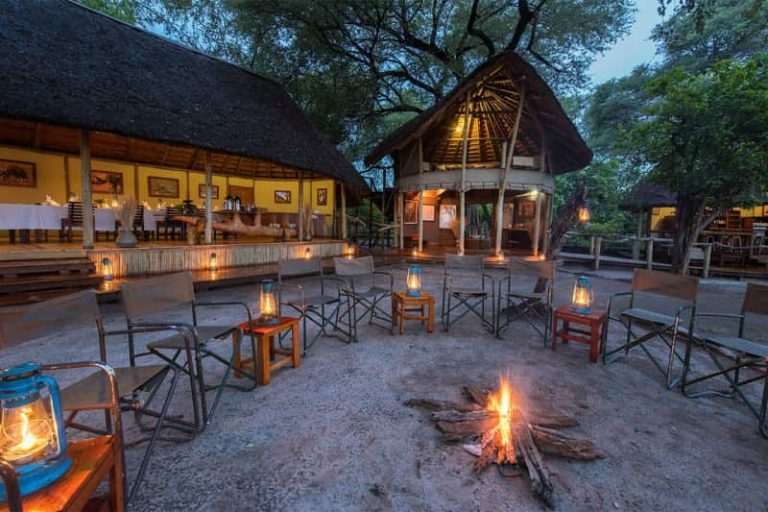 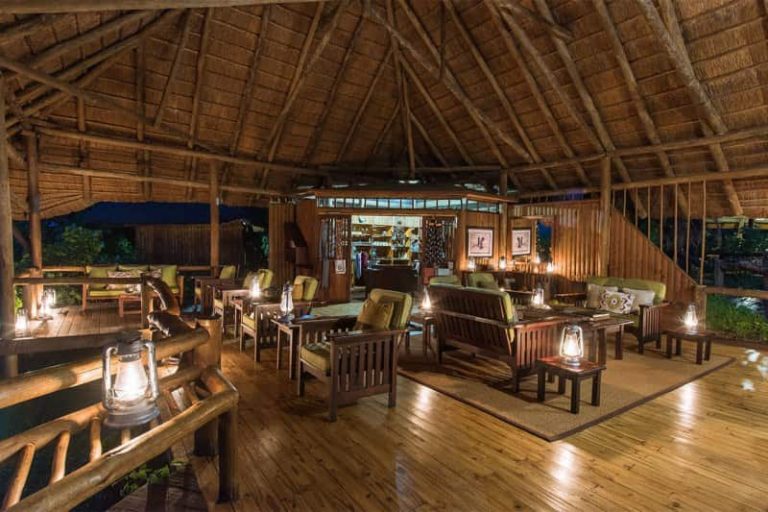 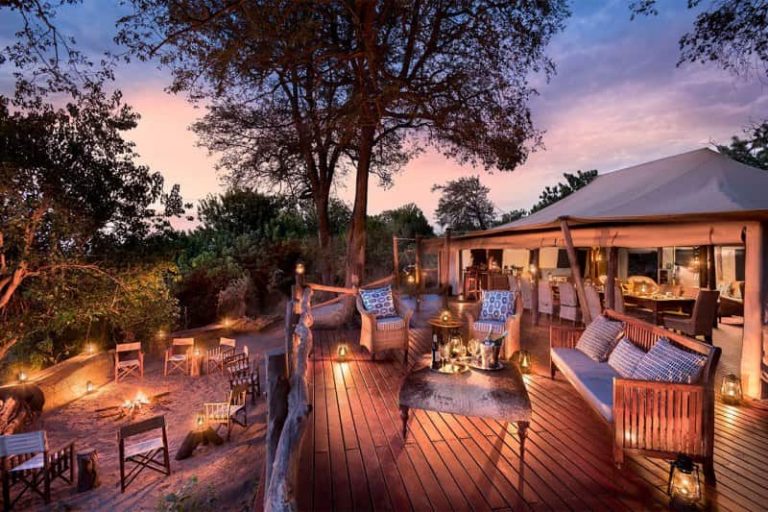 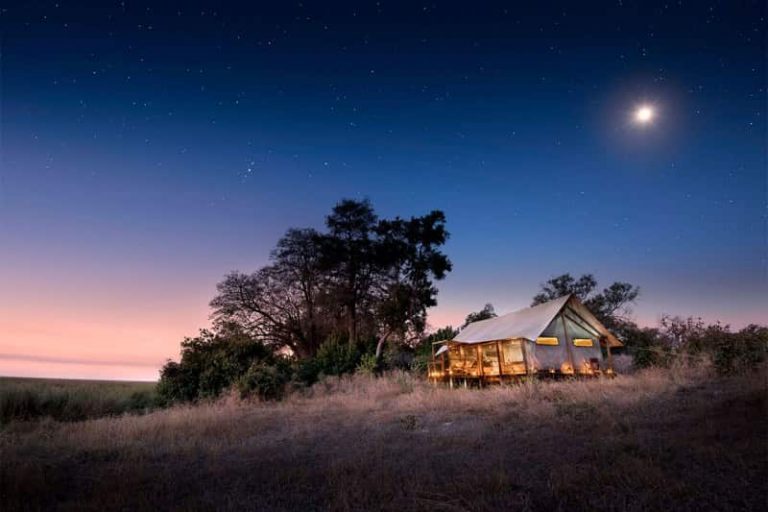 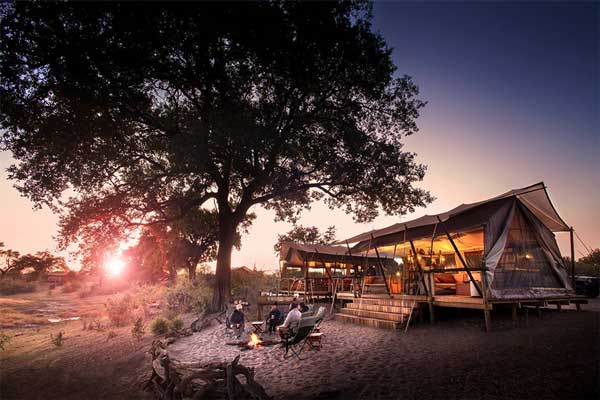 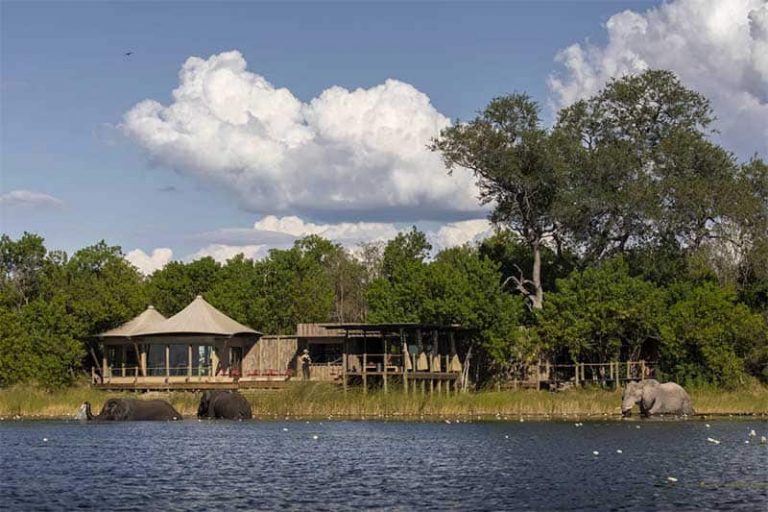 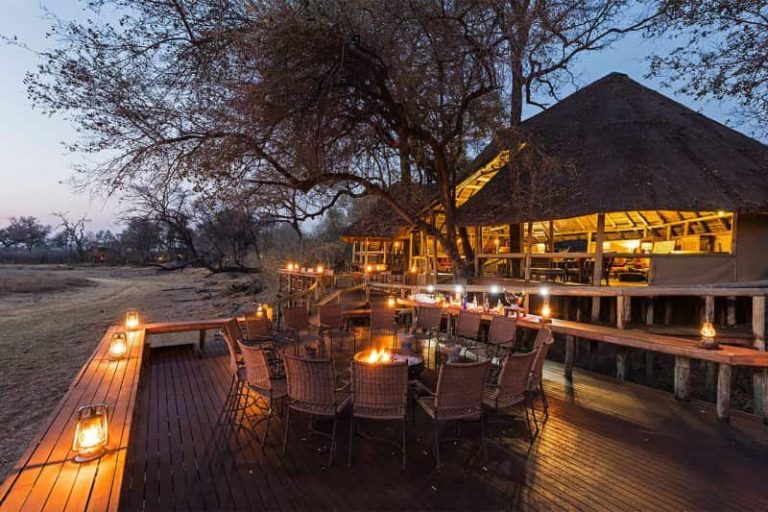 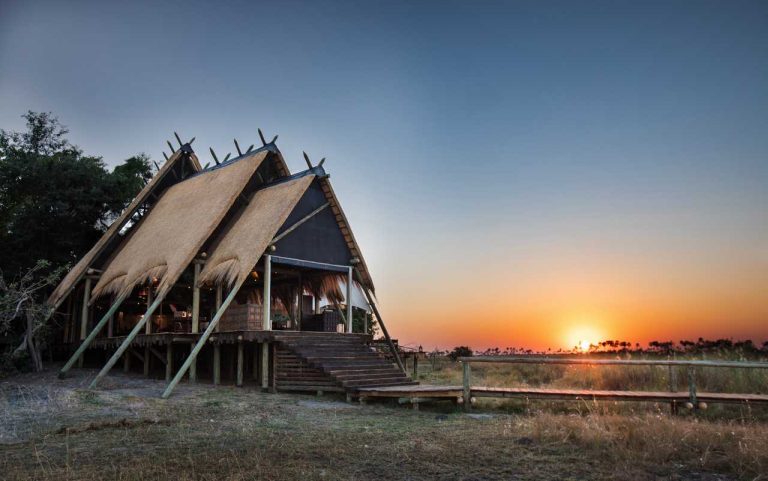 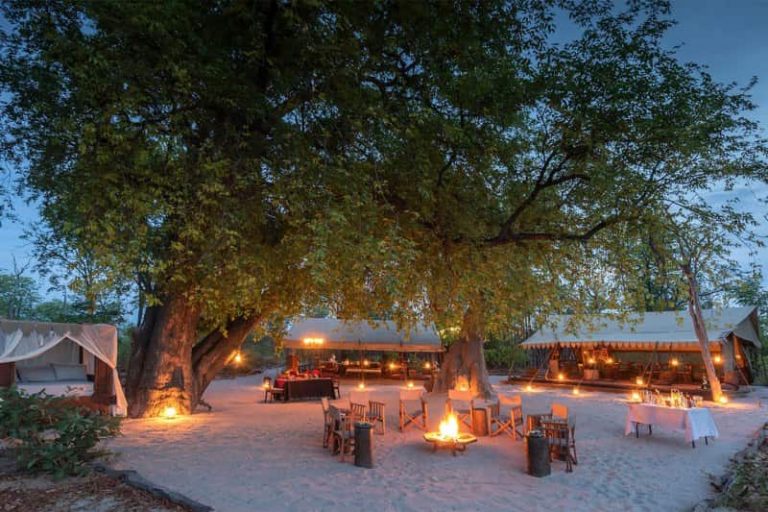 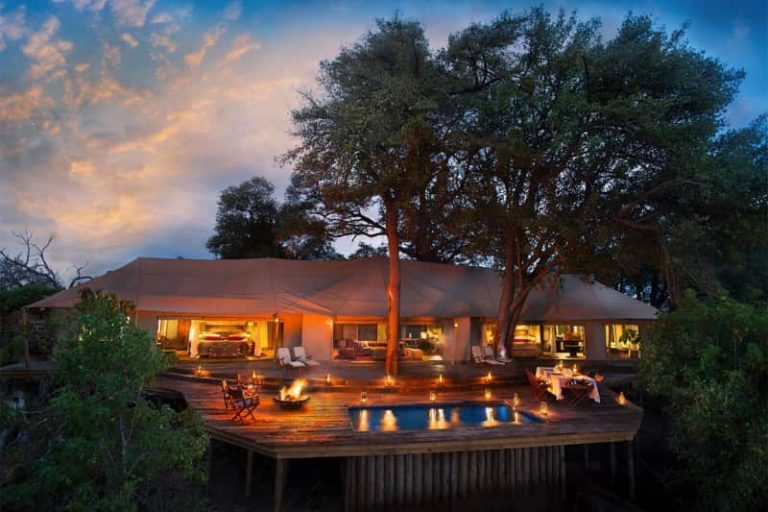 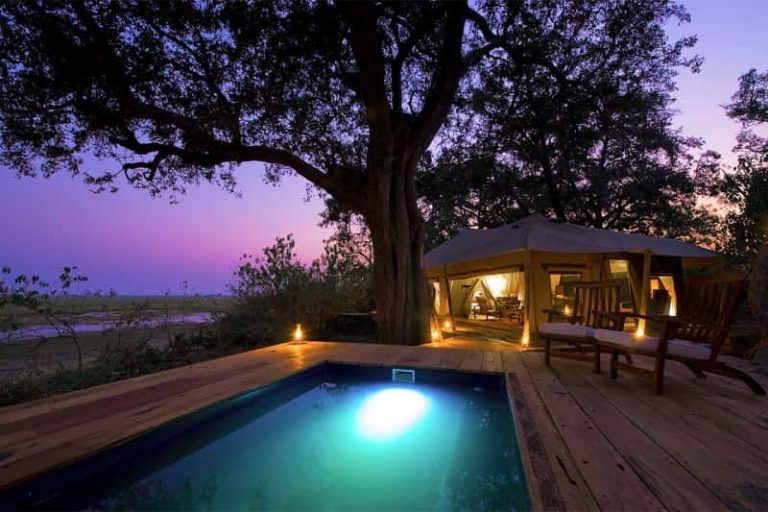 How do you get Linyanti?

The Greater Linyanti region is the best area in Botswana for big game viewing. Here you will find the largest herds of elephant and buffalo. The main predator populations are very strong and include Lion, Hyena, Cheetah and Leopard, of particular note are the Wild Dogs, which have been breeding successfully over the years. Nocturnal predators include good sightings of servals, caracal and civets.

This blue eyed leopard sits in a tree with its kill
The water areas of the Kwando and Linyanti are a big draw for the elephant and buffalo, particularly in the dry season. It is here that you will find the red lechwe, a species of antelope known well in the area. Good concentration of zebra, impala, tsessebe and kudu also abound together with the more rare roan and sable antelopes.

Birldife in the region is abundant; the flowing waterways have attracted species not necessarily known in the area, well over 500 species of birds have been recorded in recent years.

Essentially, the populations of mammals and birds in the region are too numerous to mention. Please contact us for further information or monitor our Newsletter for up to date sightings

Considered the dry months, this is actually when the Delta floods with waters from Angola (there is no rain during the time).